Well, I did it. I found my new favorite fantasy novel ever.

The gods are angry.

Volcanic eruptions, sinkholes, ground shakers–everything points to their unhappiness. At least that is what the king of Armania believes. His son, Prince Wilek, thinks his father’s superstitions are nonsense, though he remains the ever dutiful First Arm of Armania.

When a messenger arrives and claims that the town of Farway has been swallowed by the earth, the king sends Wilek to investigate. But what Wilek discovers is more cataclysmic than one lost city. Even as the ground shifts beneath his feet, Wilek sets out on a desperate journey to save his people and his world. But can he do it before the entire land crumbles?

There are so many things to be loved about this book. It isn’t a story for the faint of heart, but it’s definitely worth the read. But here’s a more in-depth look of what I thought…

The Story and World

There is so much amazing world-building that I don’t even know how to touch on this subject. The world was rich, full of life, and there was so much of it that I hated that I loved the story.

If I understand correctly, this world was loosely based around the world of the Old Testament. Williamson did a lot of research of this era, and with that came a lot of very real, very intense aspects of this world.

The Five Realms are a corrupted group, worshiping idols and turning their back on “The God” – the real, true One.

Instead of believing in Him, they live immoral lives, sacrificing people to false gods and dedicating their lives to those gods. And it’s presented as absolutely…horrible. Horrific. Not for the faint of heart.

I’m sure I’ll say this plenty in this review, but one of the things I love about Williamson’s writing (both in this novel and in her Safe Lands Trilogy) is that she isn’t afraid to tackle tough topics. She isn’t afraid to talk about things that make most Christians squeamish. She doesn’t do it in a gross, overdone way, but she does address it.

After all, in a world where everyone is worshiping false gods, why should they follow the morals that The God set forth for His followers? They wouldn’t. It’s as simple as that. And so they don’t.

There are many points of view, and just as many awesome characters. Wilek, Trevn, Mielle, Kal (and many, many more) take root in the 500+ pages of this novel. They come to life.

They’re all vastly different, with completely different backgrounds, goals, ideologies, and personalities. No space is wasted, and the characters are so very well developed that it makes it hard to choose a favorite.

After much debating, I decided Kal might be my favorite. Perhaps because he reminds me of one of my own characters.

Going into this book, I knew I was going to be using it as research (I’m plotting out a high fantasy novel of my own), but I didn’t know just how many projects I would be able to use it for.

Kal suffers from PTSD, and I have a character who does, too. I’d been searching for fiction books on the subject, and stumbled on this one by accident.

Before I knew it, I wanted to meet every single one of them and take them out for coffee.

…Except the villains, of course.

The Writing and Voice

Oh. My goodness. I just…wow.

Her writing isn’t frivolous, nor is it flowery. It’s simple, but in the best way possible. It gets to the point in a unique way that makes me want to keep turning pages.

Her voice is unique. Even in third person, I could hear the differences from Trevn’s perspective vs. Kal’s, for instance.

I’ll admit, the plot is, at first glance, the basic “the world is ending” sort of plot. But it’s also…so much more.

I think characterization, world, and voice all bring a unique twist on the “end of the world” plot. Subplots woven throughout also help with this. I was never once bored of the plot, nor did I ever think, “Oh, this tired old plot again?”

I’ll list some things that could be questionable, and rate them 0-5 out of 5 on how questionable it is. This section WILL contain mild spoilers, so if you don’t want any of those, skip over to the “Overall…” section 🙂

I recall no foul language at all.

As I said above, she isn’t afraid to tackle tough subjects. The men of the royal family are expected to have many concubines and many wives. She isn’t shy about this subject, but she doesn’t shove it down your throat, either. There are references, but never anything in-depth — the farthest she goes is a “fade to black” sort of approach.

In this book, there is violence, but it’s less…direct, per say? There’s a lot of mention of violent deaths and violent things done to people (from ex-slaves and ex-soldiers), but they’re rarely seen. When there is fighting or direct violence, it doesn’t come across as gross or overly described.

This book is amazing. I’ll sing it from the hilltops if I have to.

If you’re a fan of well developed fantasy novels with deep characters and high stakes, I’d definitely suggest you check King’s Folly out! You can follow the links and find it at any of these places:

I give this read…

Julia Witmer is a Christian fantasy writer and author of the clean young adult fantasy novel “A Wilted Willow.” Growing up overseas in Chiang Mai, Thailand, inspired her from a young age to write unusual stories about other worlds, cultures, and magical encounters, and has continued to influence the worlds she creates. Follow along on her writing journey to explore novels of hope-filled whimsy with a dash of darkness. View all posts by Julia Witmer 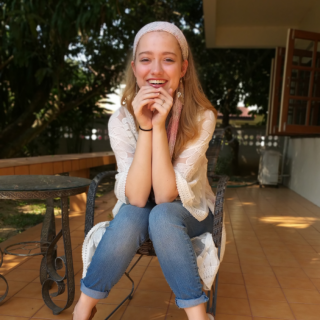 Julia Witmer is a Christian fantasy writer and author of the clean young adult fantasy novel “A Wilted Willow.” Growing up overseas in Chiang Mai, Thailand, inspired her from a young age to write unusual stories about other worlds, cultures, and magical encounters, and has continued to influence the worlds she creates. Follow along on her writing journey to explore novels of hope-filled whimsy with a dash of darkness.

Some day you will be old enough to start reading fairy tales again.